The circle is a special case: it has only one center. It’s the collection of all points that stand at exactly the same distance from that center (or more precisely, “focus”). This common distance is called the radius and it determines the circle’s overall size.

But I’m different: I have TWO so-called centers. These aren’t really at my center either, but rather spread a bit. My shape is defined as all the points whose *combined* distance from the two foci is constant. The line that runs from one side of me to the other and passes through both foci is called the major axis. A second line that cuts me in half, running from top to bottom at a right angle to the first one is called the minor axis. In a circle, the major and minor axis are the same, but in an ellipse, like me, they are different and that difference determines my overall shape, from long and skinny to short and plump. The ratio between the two axes is the ellipse’s *eccentricity.* As you can see in the self-portrait below, I’m not really that eccentric.

The Greeks (well, Apollonius of Perga in 3 B.C.) named me after the ellipsis, a composite typographic glyph composed of three full stops, one after the other which identifies an ommission. “Ellipse” was coined in Apollonius’ Conics, where Book 1, Postulate 13 defines the ellipse as a conic section (a slice) that “falls short.” We’ll come back to conic sections, but for now, just keep in mind that a circle is always an ellipse, but an ellipse is rarely a circle.
Then there’s the oval. It’s quite common—you find these all over. The oval is a closed form, continuously curved with two axes of symmetry. This just means you can fold an oval evenly in half two ways, across two different lines that are perpendicular to each other. Many, many shapes are ovals, but only a select few qualify as ellipses.
People have known about ellipses for a long time, at least since Euclid wrote his book on geometry in the 4th century B.C. Take a circle, stretch it in any one direction and you’ll find me. There’s also a very straightforward (and enjoyable) way to construct an ellipse. You’ll need two push pins, a pencil and a length of string. Take the two pins, stick them in the paper any distance apart. Connect the pins with a string loop larger than the distance between the two. Then just put your pencil in the loop, and stretch it tight to make the third point of a triangle. Just rotate the pencil around the two pins keeping the string tight and the resulting shape your pencil draws is an ellipse. 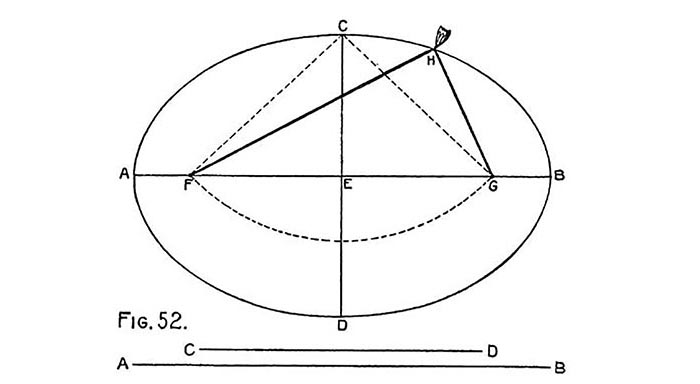 This is maybe the most obvious way to construct an ellipse, but clearly not the only one, and many constructions are known and used. The first properly formalized construction was published and circulated in Germany at the beginning of the 16th century. Unterweisung der Messung mit dem Zirkel un Rischtscheyt, or Course in the Art of Measurement with Compass and Ruler is a set of four books written, illustrated, and published by Albrecht Dürer in 1525. Each book collects existing knowledge and Dürer’s own insights around geometry, i.e. the study of shapes like me.
Continues in class . . .
February 22, 2022
Elliptical Thinking